I am constructing an annotated map for part of my Family History studies. The unit, Place, Image, Object requires that I create a representation of a place of significance to myself or my family.
All my ancestors are either Scots or Irish and the little I know about them all centres around Glasgow. That made the choice of place easy, next was who and how. The who was answered by choosing the family I am currently investigating, on my paternal side, my great-grandmother Jane Ross and her husband Archie.
Jane lived around the beginning of the twentieth century, and had twelve children. I had noticed whilst collecting the birth records of each child, that they moved almost every year until their last child was born and then remained there until their deaths.
The most difficult part was working out how to print out a map of Glasgow large enough to map their moves as many times they moved only a few doors away. I enlarged a Google map on my tablet until it was about the right size and then I took screen shots. It was tricky trying to move the selection sideways and create an overlap for joining, but even trickier was moving vertically and then back again. My first attempt was quite reasonable but I learned enough to make it a second time.

I carefully marked each address where Jane and Archie lived and drew a line to show the chronological order of each address. Not many people know that Glasgow has an underground railway, and I knew it was very old, so I looked up when it was opened and found that it was newly opened at the time of this family. I added this to the map as could clearly see the correlation between where they lived and the underground stations.
At first, I had intended to interpret the map with embroidery but I decided instead to interpret it in a drawing. This was mainly due to the time constraint; I may yet do an embroidery for my own satisfaction.

I was a child when my family emigrated from Scotland, so I chose to use crayons and child-like drawing. The Clyde River is central to the Glasgow story and so it bisects my page. The Underground Railway is in the centre, and only those stations next to their houses are marked, but they are marked like a dragon’s mouth spewing them out and swallowing them up. 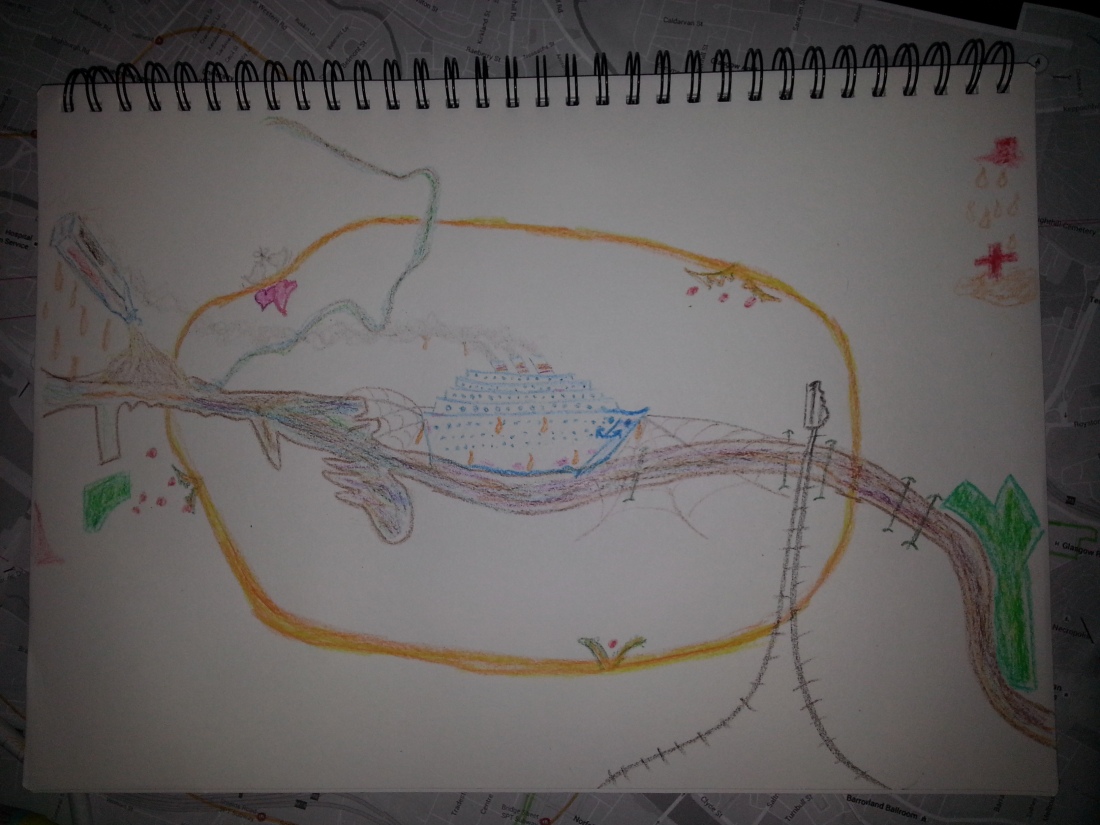 The Scots are known, not unfairly, for their capacity to drink whisky, and the only story I know about Archie is one in which he is drunk. I drew a bottle pouring whisky into the Clyde and further polluting its’ waters. An oversized passenger liner in the centre represents the influence of the shipbuilding industry that created Glasgow as it is today, as well as the fact that the liners Queen Mary and Queen Elizabeth II were built here.
I have paused for the time being whilst making that most difficult of creative decisions. Is it finished? I hope you enjoy it.

Who am I? I am different things to different people. I am a poet, a visual artist, a sculptor of found objects, and a writer. I am a bookkeeper, an office manager, an administrator and software support consultant, even a short-order cook and barista. I am a mother, a grandmother, a sister, an aunt, a cousin and a friend. I am a traveller, a technophile, a philosopher and a student of all things. View all posts by George n Gina